The Christmas 2004 Explosion of 666 Tennis Balls

I have told people to do a Google search for "Christmas 2004 explosion of 666 tennis balls" to see photos and movie clips of this 22 inch cube that I made for my brother Greg. So you have found it!

This cube (actually 22 inches wide and deep, 21.5 inches high) did actually contain 666 tennis balls, plus 60 smaller balls about 1.4 inches in diameter, 120 balls about 1.2-1.25 inches in diameter, and 10 superballs 1 inch in diameter (with spaces for 355 more of those). The inside of the box was a 20.5 inch cube, about 1% larger than 8 times the diameter of a very slightly compressed used tennis ball. The packing pattern that fits 666 balls in a cube .89% larger than a size that sounds right for 512 of them is known as "face centered cubic".

The idea was for this box to fall apart when Greg opens it. Greg "cheated" while opening it, and only a few of the balls, none of them tennis balls, spilled out in the process.

Photos have been adjusted for small file size for this page to load fast. 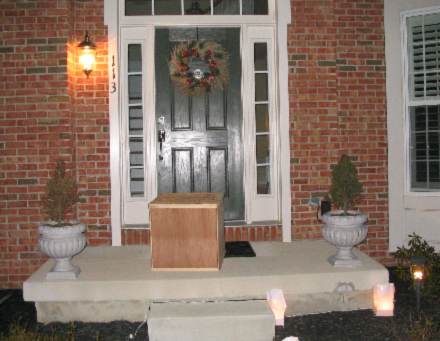 This is the box, on Greg's front steps. Greg left it there and opened it there, rather than dragging this very heavy thing over his nice hardwood floor.

I calculated that this box weighed about 40 pounds empty. A tennis ball weighs about 2 ounces, which means 666 of them weighs about 83 pounds. With maybe a pound or two of smaller balls, the total weight was roughly 125 pounds. 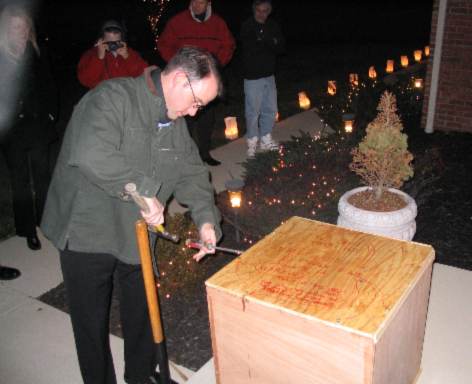 Greg is trying to pry the lid off with a hammer and a large screwdriver.

If Greg pried off the lid, this still would have happened. But things did not quite work that way... 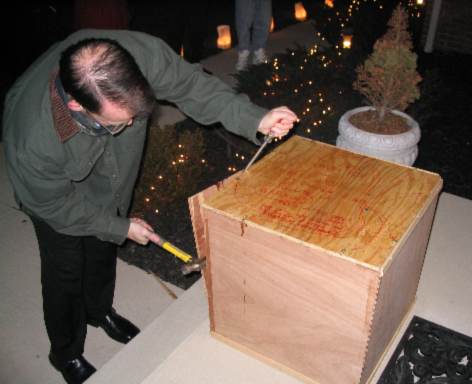 Greg now starts prying one side off. If he pried the side off, the balls would still have poured out.

NOT YET SHOWN - a few of the smaller balls leak out, and then Greg turns the box onto one side with the pried-out side facing upwards. Greg then gets that side removed with no further spillage of any of the balls.

A  4-second movie clip of one of two moments where some of the smaller balls leak out. The image size is fairly small and illumination brightness is close to uselessly low.
(File size 3/4 meg - 2 to 3 minute load time with dialup.) 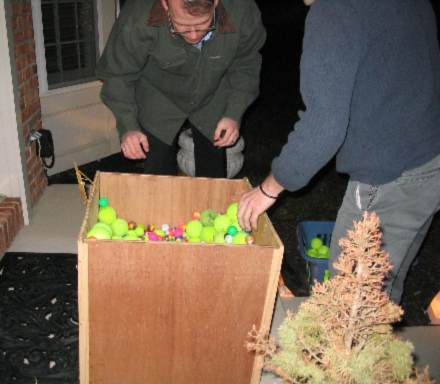 The box is open and some of the balls have been moved to a laundry basket. The gift certificate that is buried in the box is almost in sight. Written by Don Klipstein.

Please read my Copyright and authorship info. And my Disclaimer.